Wan Tsai Chen has been passionately teaching Suzuki violin and viola with the Suzuki method for over 30 years and Suzuki early childhood education (SECE) for over 20. Wan Tsai was a faculty member of the Department of Music at Fu-Jen Catholic University, Taipei American School and Taipei Hwa Kang Arts School in Taiwan. She is currently the artistic director for the Suzuki Talent Education Society (STES) in Calgary, Alberta a position she has held since 2001.

Wan Tsai continuously strives to develop and promote the Suzuki ECE program for infants, toddlers, preschoolers and their parents at STES. She applies Reggio early childhood education concepts and Edwin E. Gordon’s Music Learning Theory into her teaching in both strings and early childhood classes. In addition to having been a presenter at several Suzuki Association of the Americas (SAA) conferences over the years, Wan Tsai was on the SAA conference team in 2004/2012 and served as SECE coordinator for the 2006/2014 SAA Conferences. Wan Tsai has been a clinician for National and International teacher workshops and Institutes. She has given numerous Suzuki ECE workshops for various universities in Taiwan/Thailand and has made presentations in Japan for teachers, parents and children. Wan Tsai was on the SECE faculty for the 16th Suzuki Method World Convention in Matsumoto, Japan, in 2013 and Violin/SECE for the Cellofest International in Ipswich, United Kingdom, in 2017.

Wan Tsai’s dedication and commitment to spreading the beauty and importance of the Suzuki Method continues. With full support ofthe Suzuki community in Calgary, she produced the video Suzuki Project Zero in 2013 and three Suzuki ECE videos in 2014: Shaping Character from the Start, From the First Heartbeat and Suzuki ECE-The Pillars of the Instrumental Journey.

Wan Tsai received her B.A. in Music Performance from the Chinese Culture University and her M.A. in Curriculum and Teaching from Michigan State University. She is a registered Suzuki violin, viola, ECE teacher with the SAA and became a SAA registered SECE Teacher Trainer in 2015 and ARSA in 2017. Wan Tsai is honored to be one of the founding members of the SECE committee and also, since August 2015, serves on the Board of Directors of the SAA.

Trina Carey Hodgson has enjoyed a varied and distinguished musical career. For more than three decades Trina has honed her craft of musician and teacher. She has performed as both soloist and chamber musician throughout Europe and the United States.

Mrs. Hodgson’s performing career has taken her around the U.S. and Europe. She was principal cellist with the Graz Opera Orchestra and toured with them throughout Austria and Italy. She was a member of the Bergen Philharmonic Orchestra in Norway. While with them, she toured all over Scandinavia and northern Europe. She is a charter member of the Haydn String Quartet and the Amore Chamber Players as well as the professional cello quartet, Quatracelli! She has performed with John Tesh, Joel Grey, Michael Bolton, Ed Asner and Rene Auberjonois. Her love of Irish music even took her to play in a Celtic Band. Mrs. Hodgson has recorded with the Bergen Philharmonic, the Norwegian Radio and the Pasadena Symphony. Movie credits include “True Identity” and “Steal Big, Steal Little.” Video game recording credits include Bio Quest. Currently, Mrs. Hodgson plays in the Pasadena (CA) Symphony and freelances in Los Angeles.

For nearly twenty years, Trina directed the Pasadena based cello program, A-Cello-Rondo. She is a popular clinician at institutes and workshops around the world, including Korea, Europe, Scandinavia, Canada, South America, and the United States. Mrs. Hodgson was invited to represent the American Suzuki Teachers at a special performance at the opening of the Winter Olympics in Nagoya, Japan. Her students attend major music schools and have successful careers in orchestras and universities around the country.

Drawing upon the performance and teaching insights into group dynamics, communication and creativity which she gained over the course of her musical career, Trina has created programs that help others enhance their leadership, decision making and communication skills. As a group facilitator, consultant and key-note speaker, Trina integrates musical performance into workshops and presentations in settings that range from the corporate conference room to school music programs.

Mrs. Hodgson studied at the Eastman School of Music with Robert Sylvester, and received her Bachelor of Music degree at University of Illinois, studying with Tsuyoshi Tsutsumi. She received her Master of Arts degree at UC Santa Barbara, studying with Ronald Leonard. Other teachers include Tanya Carey, Alan Harris, Karl Fruh, Paul Katz and Irene Sharp.

She is currently serving on the board of the Los Angeles Violoncello Society, the MTAC scholarship committee, and is a member the orchestra committee of the Pasadena Symphony. Past service includes the boards of LA-ASTA and the Suzuki Music Association of California, and SAA Conference Cello Coordinator.

As a child she studied by the Suzuki Method when it was in its infancy in the United States. She decided quite early that teaching this method was what she wanted to do with her life.

After graduating from St. Mary’s Episcopal School in Memphis, she went to Matsumoto, Japan to study at the Talent Education Conservatory. For two years she studied with Dr. Shinichi Suzuki, founder of the Suzuki Method, and Dr. Haruko Kataoka, piano Master Teacher. In 1980 she performed a double graduation recital and received endorsement by Dr. Suzuki to teach his method on both instruments. She earned a degree at The University of Memphis, and has been teaching since her return.

She is a certified Teacher Trainer for the Suzuki Association of the Americas. She teaches regularly as a clinician or master teacher at institutes and workshops throughout the United States. She directs the Toscanini Chamber Ensemble, which performs widely. She was Concertmaster of the Corinth Symphony for 12 years, and plays free-lance in orchestras, chamber groups, and solo performances. She has taught and performed throughout the United States, in Japan, and in Europe.

You can view performances by Ms Armour’s students on youtube. Go to LibbyArmourStudio to watch.

Libby Armour is a registered Suzuki teacher member and certified Teacher Trainer of the Suzuki Association of the Americas. The Suzuki Method® is a registered trademark of the International Suzuki Association and its administrators. Suzuki Method® materials are published by Alfred Music, the sole distributor outside of Japan for the Suzuki® Method .

Andrea Espinzo is a Suzuki cello teacher with a private studio and public music school
in Buenos Aires, Argentina, for more than 30 years.
She holds a BA in Music from the National University of Lanus.

She started her Suzuki training in 1997 in Santiago de Chile, and Peru, in the
International Suzuki Festivals. In 2008, she completed all the Suzuki cello books
training with the teacher trainer Tanya Carey. Different teachers have influenced her
background: Tanya Carey, Caroline Fraser, David Evenchich, Carey Beth Hockett,
Ricky Mooney, Sally Gross, and Barbara Balatero among others.

Since 1989, she has been a member of a professional orchestra called Sinfonica
Municipal de Avellaneda.

She was the Buenos Aires Suzuki Association president from 2009 to 2012. She has
taught courses and master classes at Suzuki festivals and events held in Argentina,
Brazil, Colombia, Peru, Chile and Mexico.

She collected and adapted the pre-twinkle repertoire, and created the CD “Soy
Chelista”, which is used by a lot of Latin American Suzuki Cello teachers.

In 2021, she created “Chelisto”, the pre-cello didactic material for children from the age
2,5 to 4 years old.

Andrea has been a SAA Cello teacher trainer since 2019.

Andrea was raised in a very musical family beginning with singing, piano and violin at a young age.  She continued to pursue violin and participated in many ensembles throughout her public education years including touring to the U.S. west coast several times.  Her post-secondary education included receiving a Bachelor of Music and subsequently a Master of Music degree with a specialty in Violin Pedagogy at Brigham Young University.  She has performed in several string ensembles including the Brigham Young University Graduate String Quartet, Chamber Orchestra, and the Roanoke Symphony including performance tours throughout Canada and the U.S., Mainland China, Hong Kong and Taiwan.  She began teaching as a Graduate Assistant while completing her Master’s degree and was privileged to take a course with Hiroko Primrose to introduce her to the Suzuki method and philosophy.  Andrea has valued the many mentors she has studied with throughout her Suzuki education and accreditation including: John Kendall, Craig Timmerman, Carol Smith, Helen Brunner, Linda Fiore, Paule Barsalou, Shigetoshi Yamada, Dorothy Jones, and Nancy Jackson.  She is the Owner & Instructor of the Heart & Tone Music Studio. She has been mentoring Violin students of all ages in Calgary for over 35 years along with doing clinician work at various workshops and summer string institutes.

Mrs. Bossé-Morgan holds a B. Mus. in cello performance from the University of Alberta. As a student she was principal cellist of the Edmonton Youth Symphony Orchestra, and later co-principal of the University Symphony Orchestra and of Academy Strings. She completed examinations with the Western Board of Music in both cello and piano, and upon completing her B.Mus. degree in performance served a 10 year term as a strings and piano examiner for Conservatory Canada. Mrs. Bossé- Morgan has been a member of the string quartet “Quartette des Muses” since 1990, often plays in the pit orchestra for the Sherard, ELOPE, and Festival Players Musical Theatre companies, and is a co-principal cellist of the Edmonton Metropolitan Orchestra. Since 1989, Mrs. Bossé-Morgan has been teaching with the Society for Talent Education (http://ste-suzukistrings.org). From 2016-2020 she served as the music director for the Society for Talent Education. She has adjudicated festivals in strings, junior piano, and band since 2009. In 2010 she joined the staff of the Suzuki Charter School where she teaches cello, double bass, and mixed ensemble classes. She also maintains a small private studio in cello, piano, and theory. She has had students compete successfully in the Kiwanis Edmonton festival, provincial festivals, the provincial national class, and the Northern Alberta Concerto Competition. For several years Mrs. Bossé- Morgan has also been involved with the music ministry at her home church, where she sings alto and plays both cello and piano. 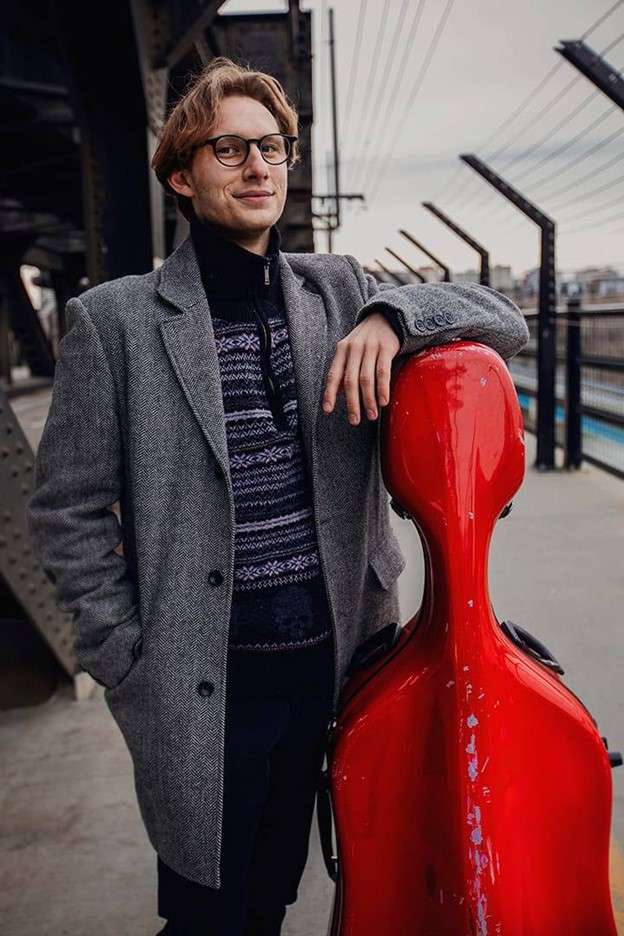 Edmonton born cellist and composer Conrad Sobieraj began playing cello at age 4 under the instruction of his mother Grazyna Sobieraj. In preparation for university he studied with Silvia Buttiglione of the Vaughan String Quartet, and went on to complete his Bachelor of Music in Cello Performance from the University of Alberta under the instruction of Rafael Hoekman. During the first two years of his degree, the Vertex String Quartet premiered both of his compositions in 2017 and 2018 respectively. He continues composing tunes for his students and peers. Conrad is one of the founding members of the early music group Convivencia Canadá, and a Bossa-nova trio, Rei Rei Rei. Currently he plays in the Vertex String Quartet, and is the principal cellist of the River City Orchestra. When he is not performing, Conrad is teaching, composing, and painting. 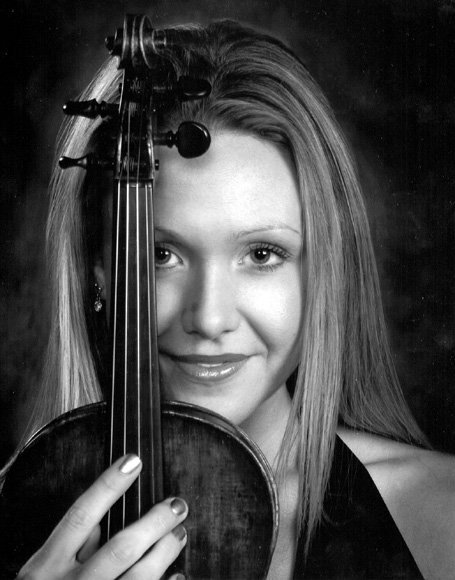 Melanie Smith-Doderai holds a B.A, B.Ed and M.Ed.  Melanie is an active member of the Alberta Registered Music Teachers Association, holds an Advanced Specialist Certification from the Royal Conservatory of Music in Canada and is an Early Childhood Music and Movement specialist in her district. At present, Melanie performs with the Divertimento Baroque Ensemble, with Vivace Strings and Keys and as a freelance musician. Melanie is also a private violin instructor.

Melanie has combined her passion for music and her artistry of aerial dance into a unique and innovative art form that is both inspiring and visually compelling. Audiences can expect to be compelled by Melanie’s playing while suspended in the air using an aerial sling, aerial hoop, lollipop lyra or a two-point hip harness.